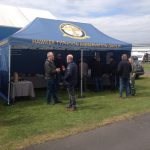 Saturday 29th April, 2017, saw the very first outing for the Hawker Typhoon Preservation Group air show stand. The project decided on the Radial & Trainer Aircraft Fly In, which formed part of the Wings & Wheels event at Wolverhampton Halfpenny Green Airfield as the ideal one to ‘trial run’ the stand. The event was perfect to test the stand, get to grips with the internal layout, the amount and type of merchandise available, not to mention the logistics of everything on a show day. The event was also used as a meet and greet for those members of the Supporters’ Club who have expressed an interest in helping to man the stand and be the face of the project across the coming air show season. It was a great opportunity to see these members, some of whom we were meeting for the first time. The whole team are all now looking forward to a busy year getting out and about at UK air shows.

The team have been working very hard over the winter months, working with designer Grenville Tanner, going back and forth, finalising the artwork, and eventually we arrived at what you see before you. Gren contacted the project many months ago, offering his design services for free and also putting us in touch with Neville Newton of Banana UK Media, who supplied the stand to us at cost price. This was a great example of people who all want to see the same thing, working together and we hope you will agree that it looks great. Through the co-operation of Gren and Neville, we have saved the project thousands of pounds – all money that can be spent driving the project forward. To them we are very grateful and we will certainly be working with them in the future.

At the Fly In event on Saturday, the stand received a lot of positive feedback. This came from all kinds of people, other charities, pilots, general public and the organisers themselves, all commenting on the professional look of what we had achieved. First impressions count, and when involved in the rebuild of an aircraft of this magnitude, only the best will do. This is partly the reason why we held back on attending air shows in the 2016 season, as we wanted to ensure everything was right. Naturally we have a few alterations and slight improvements to make, but by the time of our next air show commitment we will have all those things in place.

“Typhoon Towers” as we heard the stand being referred to as, was a firm favourite 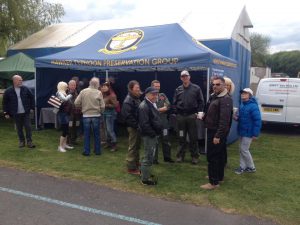 with a number of pilots who had brought aircraft in to the event, and it has even been suggested that we could be the RV for pilots at air shows throughout the season. One thing that was clear was the amount of support gleaned from what was a relatively small, low key event, that we had not promoted our attendance at. We had a steady stream of people approaching us, asking questions about the project, joining the Supporters’ Club, purchasing merchandise and making donations. It was a great response and something we were not planning for, we really were using the event as a trial run for the stand to see how it all “worked”.

We (the three trustees) and the volunteers who came along on the day all left the event with a renewed sense of pride in the project and a sense of anticipation as to what the year ahead holds. If the response is anything like what we received yesterday, when you magnify that up by the number of people who attend shows such as Duxford and RIAT, then come the close of the season, the project will have taken great steps forward. Our aim is to have 1000 members of the Supporters’ Club by the end of the year, and we anticipate achieving that a great deal sooner. We are still seeking volunteers from within our Supporters’ Club to help out with manning the stand, and the full list of shows we plan to attend can be found below. If you would like to be a part of the story, then the first step is to join the club and then this and many opportunities will be open to you. You can find details of the Supporters’ Club here.

Please do come and say hello at any shows you may be attending – there will also be some exclusive “air show only” merchandise available, and remember, all proceeds go to the charity! This is the current list of air shows that we are planning to attend, more volunteers are required for ALL shows at this time:

This list is subject to change for operational reasons/manning requirements, and of course we may look to add more, but it is looking set to be a busy year. 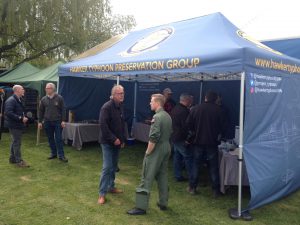