Sunday October 29th, 2017 saw the very first Open Day at the project’s new home base in Uckfield, East Sussex. The event was laid on for 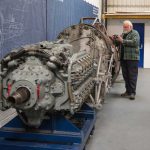 members of the Supporters’ Club and was a great success. It had been just a few months since the project signed the 5 year lease and received the keys to an empty industrial unit at the height of the air show season. Initially there was no time to conduct the work required to host guests, but every weekend in October a small but dedicated team of volunteers, made up from members of the Supporters’ Club and the project’s Trustees, travelled long distances and put in long hours in order to transform the inside of the unit into a suitable venue to exhibit the project and host guests. The results were seen on Sunday 29th October, exactly one year on from the project’s public launch event at the Boultbee Flight Academy hangar, at Goodwood.

The event was attended by approximately 80 members of the Supporters’ Club, eager to see what their membership subscriptions had allowed the project to achieve. Three special guests had been invited, and the team was exceptionally happy that all were fit to make the journey on the day. Bernard Gardiner was able to attend from Jersey and the project was delighted to meet him for the first time and George Wood and Derek Lovell, who both attended the launch last year, were also able to attend, meaning that the Supporters were greeted by three WWII Typhoon pilots. The pilots arrived early, in order to settle in and have a good look over the project in its current form, with Derek quick to remind the team that one section of donor aircraft they possess is from a “Coffin Job” Typhoon – a Car Door type cockpit. All three gentlemen were in fine form and the team was delighted they could attend.

The doors opened at 1200 with guests arriving over the course of half an hour and at 1230 a short welcome address was given by Sam Worthington-Leese, one of the project’s Trustees and the aircraft’s future pilot. He outlined the achievements in the last year, including acquiring one of the only suitable Napier Sabre engines known to exist, attending a first 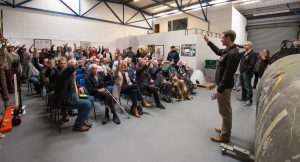 full season of air shows, passing 600 members of the Supporters’ Club, being put in contact with many former Typhoon air and ground crews, a number of significant donations and also achieving the financial stability required to sign the 5 year lease on the home base in which the event was being held. A recent (two days prior) acquisition by the project was also unveiled to the assembled guests, in the form of a pristine 4 blade Spinner for the aircraft, thought to be the only one in existence and requiring only minimal work in order to be certified “airworthy”. During this short speech, he reaffirmed the project’s will to begin “cutting metal” on the formal rebuild as early as next year, if funds continue to be raised at the current rate and drew it to a close with a toast for all present – “to the project!”

Over the next hour the guests were then free to peruse the project’s collection, which is now widely recognised as being the largest collection of Typhoon parts and information outside of the RAFM’s Typhoon, which is currently not in the country. The main aircraft “body” is now made up of RB396’s rear empennage, a complete cockpit section through to engine mounts, front canopy screen, Napier Sabre Engine and 4 blade Spinner. Also in the collection at the base are spares from a second Napier Sabre, a second cockpit section, engine mounts, three firewalls, two complete “new old stock” sets of main undercarriage legs, 5 recovered undercarriage legs, a complete tailwheel and leg, a complete set of elevators, a large number of main spars, wing root castings, the only example of an original “chin scoop” radiator housing and radiator shutter, large sections of wing spar, and many examples of brackets and tube assemblies, plus much more.

The purpose of the event was to open the doors for the first time, but also to raise critical funds required to allow the project to progress and also to purchase items such as the Spinner – from the same donor is also available a complete tail unit and a second rear empennage, both 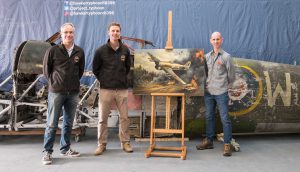 important to the project and requiring significant funds to secure. Part of the fundraising on the day was a raffle of many donated prizes, such as a pair of Flying Legends 2018 Gold Pass tickets, a number of rare Airfix kits, Whiskey, Wine, Chocolates, Books and DVDs etc. Also up for grabs in the “Silent Auction” were a number of artworks, and some other goodies, some signed by the attending veterans. Both events were very well received with a significant amount being raised for the project in the process. The winner was also drawn, by George Wood, for the raffle that has been running all summer at air shows across the country, for membership number 0396 – and this was duly won by Rob Jacklin, so well done Rob. Also at the event, in a dual capacity as member and artist, was Neil Hipkiss, who is just putting the finishing touches to his exceptional artwork depicting RB396 towards the end of her WWII flying career. He brought his very nearly complete piece along, still on its easel, to a wonderful reception. When it is finished, in the next month or so, a limited edition run of prints will be made, and sold, with all proceeds going to the project – Neil has even donated his own materials to the painting, so a big thank you to him for that.

To close the day, after the prize winners were announced, the three Pilots who had joined us on the day were inducted as honorary members into our Life Supporters’ Club in recognition of their actions in the aircraft that the project is trying so hard to return to the skies. Plans are being drawn up to welcome as many veterans, both air and ground crew, who served on the Typhoon, into the club as possible.

As the doors were closed the team were able to reflect on a very successful day, all aims were achieved and it is testament to the team of volunteers who are now an integral part of the core team, that the event was able to run as smoothly as it did. The team is now planning the next Open Day, but would first like to thank ALL members of the Supporters’ Club who, through their support, have allowed the project to progress at such a rate. The Supporters’ Club is open to all, and is the ideal way to get behind the project and show your support, subscriptions start from just £25.

To view all photos from the event, check out our gallery here.

Note to editors: for all enquiries please contact [email protected]