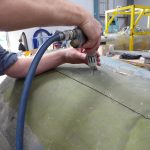 The Crowdfunder campaign, which reached its successful conclusion in April, enabled to project to take the first major step in the physical rebuild of RB396. Announced on the website in May, the rear fuselage of RB396 was transported to the Airframe Assemblies (AA) on the Isle of Wight, so that work could commence.

As much as the team wanted to get stuck in at the deep end and begin building immediately, these things take time. The first step, in the “rebuild” was actually some more paperwork. Lots of it. It was the registration of the aircraft and this process was essential for the physical work to commence. 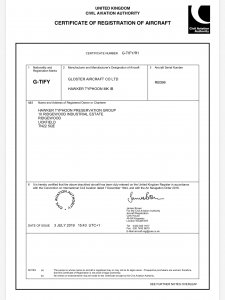 Trustee, Dave Robinson, began the application process, one that should take just a matter of a single form and the time taken for the CAA to review the application. As with all things technical this wasn’t a simple case. Two weeks of form filling, answering queries and supplying additional information regarding the history of RB396 and a further 3 weeks of waiting while departments within the CAA did their due diligence and we finally had our certificate of registration. She has now been recognised with her RAF serial, RB396, and entered onto the CAA database of registrations.

We are delighted to announce that RB396 has now been registered with the CAA, on what is known as the “G reg”. For those who may be unaware, this is required of any aircraft that is to fly, and is effectively the same as registering your car, giving it a number plate. It was identified some time ago, that a fitting registration would be significantly nicer than “the next one off the shelf”, so once the paperwork was completed, RB396 was registered as G-TIFY in honour of the nickname these aircraft were affectionately known as by their crews.

The registration only came through in the last month, such was the extent of the paperwork required, but the CAA are fully on board, their inspector having visited Airframe Assemblies and been in close contact with the Aircraft Restoration Company, Duxford, who are overseeing the rebuild. Work has now begun in earnest. AA have removed RB’s top skin to expose all the internal ribs (the original rivets being saved for future fund raising initiatives) and in addition to this have removed part of the rear frame for assessment.

The old paint and grime was removed from this rib section and RB396 was found to be in remarkable condition, in fact so good that AA engineers began the process of inspection, cleaning, protective painting and giving it a clean bill of health. It is remarkable to think that 74 years after she force landed, this original material will remain in the aircraft the day she flies. The photos show just how well some of the components have come up so far. From this initial work it is expected to be able to re-use some 60% of the rear fuselage structure. This is significantly more than many other rebuild projects.

AA temporarily re-fitted the section of rib to the rear and can now continue as quickly as funds will allow. The project’s budget, at this time, for the rebuild work is £10,000  + VAT per month. At £10,000 per month, the rear fuselage work will take approximately two years, and the project has, at this time, eight months work of “work” in the bank. Fundraising efforts continue, with the remaining air shows this season, other events, merchandise sales and membership subscriptions and renewals later this year. These are estimated to raise in the region of £60,000 – £70,000 at the highest estimates. So, we still have a lot of work to do, but it is hoped that this news of what people call “real progress” will whet the appetite of new supporters, which will continue to help the fundraising.

The management team are working hard on two documents; the “Project Story” and the “Project Plan”. The latter is effectively a detailed business plan, which is an expanded version of the “Story”, which sets out exactly what we are doing, why we are doing it, and what we’re aiming to achieve. It is our Purpose, Values and Goals. Once these documents are complete it is hoped that they can be shown to individuals and companies that may wish to take the project’s sponsorship, fundraising and donations to the next level. These documents are incredibly time consuming, so much so that they have been worked on, so far, for approximately two years. But, such is the pace of the project, with all the other things going on and needing attention, and the fact that everyone is a volunteer in their spare time, it takes a very long time.

Whilst the project’s target for completion is 2024, and has been since the before charity was formed in May 2016, it has always been made clear that it is funding dependent. Should a number of large donors be found, then 2024 is achievable. At £10,000 per month, clearly it will take longer. The team is still committed to achieving the 2024 target and is doing everything in its power to make that happen. A gallery of these, and other progress shots has been created in the “Gallery” section of this website, you can access it by clicking here. It is our intention to add to this gallery as photos are received from AA, as work progresses, hopefully as often as every week. So do keep checking back for more.

It is worth remembering, that the entire team on the HTPG side of this project is working on it in a spare time, volunteer capacity. Once again, the HTPG would like to thank all those who have contributed to date, to allow the project to be at the stage it is.