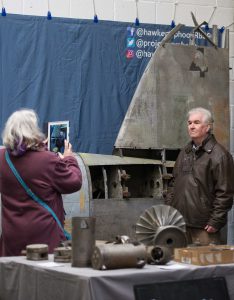 On Sunday 3rd December 2017 the project’s Uckfield base was open to all. Around 100 guests came through the duration of the day which ran from 1200 – 1500. Just five weeks previously, exactly one year on from the Launch event at the Boultbee Flight Academy on the 29th October 2016, the unit had been opened for the very first time with a special Supporters’ Club members’ day, to celebrate the anniversary and achievements of the previous year. That Members’ day was intended to be the only Open Day type event of 2017, but such was the demand to come and see the project, that the team decided to try and open the doors one more time before Christmas.

In the interim period, some significant parts had become available to the project and a fundraising appeal was launched to the Supporters’ Club. This appeal was very successful and the parts were duly secured and a collective effort meant that they were transported to the unit in time for the second Open Day. Visitors on this day, were the first to lay eyes on the new acquisitions that advanced the project greatly, the advancement is such that the physical build is now likely to begin in 2018.

The format of the day was very simple, the doors opened at 1200 and between then and 1500 guests were free to come and go to see the project, meet the team, ask any questions, purchase merchandise, enter the raffle or join the Supporters’ Club. Pleasingly, around 75% of those present who weren’t already members of the Club, decided to join on the day. The day was a great success, not only in introducing the project to more people, but also in raising important funds – around £3,000 on this day alone. This figure came from applications to join the Supporters’ Club, merchandise sales, a raffle and donations. It is all greatly received and 100% of this figure goes back towards the project. 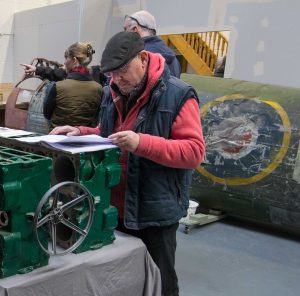 Pending an appeal to the Supporters’ Club for a few more volunteers, it is planned to have the unit open on one regular date each month throughout 2018, this will allow even more people the opportunity to come down and see what the project is doing, and how things are going. We will bring you news on the dates of these Open Days as soon as they become available and are confirmed.

We are also aware that there was a bit of difficulty experienced by some, relating to the sign up form for the event. At present, the address of the unit is not being shared publicly, or promoted. In early 2018 we should be able to, and hence the future events should not be so complex. If there is a need for a sign up form, we will endeavour to fix the glitch that seemed to be apparent for some.

If you would like to join the Supporters’ Club, in order to receive advanced notice of future events, and the opportunity to volunteer with project, among other benefits, then please click here for more information.