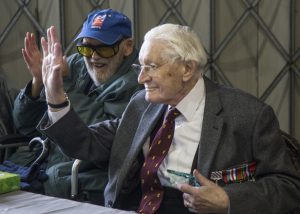 We are very sad to report the passing, yesterday, of Flt Lt David Ince DFC.

David, originally an Army Artillery officer, transferred to the RAF and flew Typhoons with 193 and 257 Squadrons throughout the Normandy campaign, then into Belgium, Holland and Germany.

After the War, David was the founder of the Typhoon Entente Cordiale Trust, TECT, established to foster links with Typhoon crews past and present, and also responsible for the memorial to Typhoon crews at Noyers Bocage in France.

We are currently working with TECT, to establish whether the family would wish for any supporters and followers of this project to attend David’s funeral, which is on the 31st August in Winchester.

It was an incredible honour for the team to meet David at our launch event just 9 months ago and the team is all saddened at his passing.

We now know that David’s funeral will be at 1200hrs on Thursday 31st August, at St.Mary’s church, Easton, which is 2.5 miles North East of Winchester. You should know that Easton is a small village and the church is not a large one, we have had confirmation from the family that any Supporters and followers of this project would be welcome to attend the service, but may be prepared to make room for immediate friends and family. Anyone interested in attending the service should please contact: sam@hawkertyphoon.com so that an estimate of numbers can be passed to the family. Thank you.