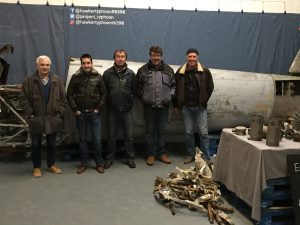 Early in December, a group consisting of Jean-Michel Goyat, Julien Arcanger, Pierre Ben, Alexandre Patte and Bertrand Ridel (left to right) made the journey from France in order to donate some recovered Typhoon artefacts to the project. Dave, one of the two trustees, was able to meet them at the project’s Uckfield base in order to receive the parts and entertain the team for a few hours, before their onward journey.

The parts come from recovered Typhoon JP600 XP-K which was being flown by F/O J.F Cobbett on 7th January 1944 when its career came to an end after colliding with Typhoon JR373 (flown by F/S R.V Smith). Unfortunately F/O Cobbett was lost in the collision but F/S Smith managed to escape his stricken aircraft and became a PoW. Whilst damaged, the parts, some of which are large sections, will be carefully catalogued and they will yield important engineering data. Indeed, surviving ribs from the rudder and the crumpled lower tail section, still with its undercarriage leg attached has already filled in a few gaps and answered a number of questions regarding the Typhoon tail section.

Donations like these are incredibly valuable in any rebuild project, but especially in a Typhoon, where so much of the data was lost after the War. The team is working hard in order to fill in all the gaps, whether that be through meticulous scanning and cataloguing of every part possible, or by working hard to track down the missing engineering drawings – of which there are many. After the War, staff and contractors were paid “by the drawing” for those that they transferred from linen to archive, and it didn’t take long to work out that they could complete more smaller drawings in a day than they could large ones, which led to a lot of the larger drawings simply not getting completed when the budget ran out as the many smaller ones were more lucrative.

These gaps are slowly being filled, and with the engineering data that these and other recovered parts will provide the project is getting closer and closer to being able to fill in all gaps. The trustees would like to thank Monsieur Ben and his team for making the journey and supporting the project by donating the parts to help the rebuild.