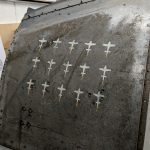 On the 9th March 2019, the Team headed out to ‘somewhere in Essex’ to collect the majority of the JN768 Tempest Project. A van, a trailer and numerous cars collected where needed to pack up the assets of the project and transport it all down to Project HQ in Uckfield. The cockpit section will be collected later.

The collection also gave us opportunity to get a look at the jigs that will be vital for RB396’s restoration. The bright yellow jigs for the rear monocoque and tail are the main reason for the acquisition of JN768. While built for the Tempest Mk.V project, they are Typhoon compatible and having access to them represents a considerable saving to the project overall.

One of the more exciting items is a complete canopy frame with plexiglass. This canopy, which we popped on RB for the photos (and would sit much further forward on the fuselage), really shows the scale and size of the cockpit area. Along with the canopy, there is also a canopy winding mechanism attached to a cockpit panel. This panel and mechanism would sit on the side of the display cockpit we have that is open. All these elements, while coming from a Tempest, are Typhoon compatible and vital in the long run for the project.

Among the collection are Tempest undercarriage fairings, many undercarriage legs (from Tempests and Sea Furies), fuselage and wing skins, fuel tanks and a Tempest tail ‘fillet’. Other items include two four-blade propeller hubs, a Napier Sabre carburettor, manifold and supercharger, oxygen bottle and Tempest oil cooler.

Maybe the most striking parts of the collection is the forward cockpit cowling that displays the 15 V-1 kills. Getting up close to the markings, as you can see in the photo, you notice that each V-1 includes a red plume from its engine. These unmanned weapons were a terrifying weapon and the bravery of the crews that fought the dangerous V-1 engagements is one that is quietly championed by these markings.

Your opportunity to view all these parts, and hear all of the latest news, is coming up with our Spring Members’ Day. Members’ can reserve their place now via the link in the Spring Bulletin. If you did not receive the bulletin, please drop us an email or DM on our Facebook page and we will make sure you get it.

If you are not yet a member of the RB396 Supporters’ Club, and what to come along in April, there is plenty of time to join up and reserve your place. Your first step is to join the Supporters’ Club, which you can do by clicking the banner below the gallery. We look forward to welcoming all our Supporters to HQ soon!