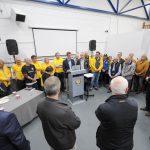 The last Sunday in October is always the RB396 Supporters’ Club Members’ Day. Why? Because it was on this weekend in 2016 that the project was officially launched to the public at the Boultbee Flight Academy Hangar, and the Supporters’ Club founded by raffling off the first membership number. Now, three years on, the project is in its own premises, fully established, with a Supporters’ Club membership of over 1200, and growing, with that first membership number winner now a volunteer on the team. The rebuild has commenced, and fundraising continues, along with a lot of hard work from the expanding all volunteer team.

With so many of the team in the same place at the same time, and it being the natural start and beginning of the project’s season, the AGM is also held over this weekend. It is an important coming together of key team members and volunteers, with the Trustees and Management team presenting the previous season’s progress, and outlining plans for the next season. At this year’s AGM, there were a number of very exciting announcements and developments. Many new members were welcomed to the team, with their job roles being discussed and relayed. With this extra capacity, it should allow the project to continue to develop, although more help is always needed. 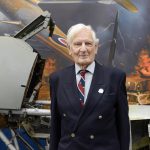 As ever, this year’s Members’ Day did not disappoint. A sell out, with over 130 guests, Bernard Gardiner managing to join us from Jersey (not Guernsey!), a team from More4 filming for an upcoming documentary, a hog roast, Aces High bringing a lot of artwork and donating a very large percentage to us and the all important drawing of the “year raffle” to find that Spitfire (or Mustang/Sea Fury) flight winner.

The trustees gave an address, in which they relayed the key points from the AGM, paying particular attention to the progress that the project has seen this last year. The total amount raised to date was revealed, and it is an impressive figure. Since the Charity was founded by Dave Robinson and Sam Worthington-Leese in 2016, it has raised: £575,267.61. This is an incredible figure, especially considering no one on the team has had any prior experience of raising money on this scale, let alone half a million pounds. It is a reflection of all the hard work that everyone has put in, that the figure is so high. It is easy to say, when 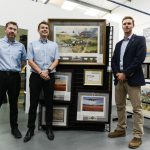 looking at that figure, “why hasn’t more of the aircraft been rebuilt?” It must be remembered that the charity just existing, costs in the region of £25,000 per year, not including the set up costs of transport, the unit itself and its facilities, and also not forgetting the aircraft parts acquisitions over recent years, all cost significant money. To date, £50,000 has been spent on the rebuild of the rear fuselage, with another £50,000 of funds in the project’s bank account earmarked to go to the Isle of Wight.

Upon securing sufficient funding to complete the rear fuselage section of RB396, the next section to be targeted and rebuilt, will be the cockpit section. This is one of the more prominent sections of the project, accompanying the team to the Duxford air shows on many occasions. It is also remarkably complete. Not cheap, it will take in the region of £350,000 to complete. However, when that is married up to the completed rear fuselage, you will really be able to see RB396 taking shape. It is the project’s target for work to commence on this section next year, 2020.

The business plan is almost complete. This has been a long time coming, almost entirely due to the fact that those writing it (the trustees and a handful of others) have not had the time to concentrate on it, due to the day to day running of the charity having to take priority. Now, with the extra team members coming forward, work has progressed on this very quickly. It is the intention for this document to be used to secure some of the higher level funding that the project needs to keep on track with the 2024 target. If you, or any contacts you may have, feel you could be able to support to this level, please do contact the team. 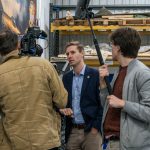 The “year raffle” prize winners were drawn, with three of the winners, incredibly, in the audience. The shop team, are in the process of contacting these winners to administer the prizes.

To finish the day and bring the event to a close, the Trustees praised the hard work of the volunteers on the team, and rewarded all those who had made a significant contribution of time and effort in the last season with a specially designed, one off, commemorative coin. Although every volunteer’s work is appreciated and vital, in every situation there are always one or two who go above and beyond. This last season, many people have gone above and beyond on the team, Dave Hands taking over the running of events, at home and all around the country. Andrew Boakes becoming responsible for getting the project plan to the completed stage it is, to name just two of the team who have made significant contributions. There have been many, many others who also made significant contributions, indeed, almost every volunteer on the team has and it is impossible to name everyone. However, this season, with the focus being on transitioning the day to day running of the charity to volunteer team members, there have been two people without whom, the project would have collapsed and the day to day tasks, the shop sales, the Supporters’ Club and the air show presence would not have been possible. Without them, all other tasks would have been pointless.

As you may know, at the end of last year Sam joined an airline and commenced his type rating, moving to “the North” at the same time. As such, he could no longer spend the time he was doing, at the unit, running the project and shop in such a hands on capacity. Without Dave Brockhurst taking over the running of the shop from Sam, it would have failed, losing in the region of £40,000 worth of income for the project. Dave has done an incredible job taking it on, problem solving, and starting to develop the shop further, ably assisted in this role by John Moorley. 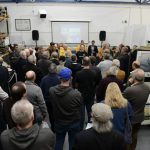 Without Tim, whose title is “premises manager” then the project would also be in disarray. As Sam moved away, so did the day to day responsibility of ensuring the project’s base was fit for purpose, the liaison between shop and airshow and the person being the “go to” with any unit based issues. Tim has gone above and beyond this role, making money, making the very long round trip more frequently than has been asked of him, ensuring that all the kit from the shows is ready, boxed and packed, then checking it back in afterwards, along with Dave B. Not things that are in their job description. Not to mention single handedly organising the Chalke Valley History Festival at the last minute, setting an example for how a show should be organised, one that will be the target for future events.

Without Dave Brockhurst and Tim (and Nancy) Roberts, then this last year the project would have been in trouble. It has been the project’s policy since day one, that membership to the Supporters’ Club is not given out as a gift. Well, in this instance the decision has been taken to see that policy as advisory. Especially as Nancy (Tim’s wife) has been helping out a lot, and we have always said that volunteers must be members, it gives us great pleasure to present Tim & Nancy and Dave Brockhurst with Honorary Lifetime Family membership to the Supporters’ Club, in recognition of the incredible amount they have done this season. Almost all behind closed doors, just simply getting on with it and getting the job done. 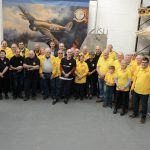 The overriding feeling at this year’s Members’ Day, after a long and tough season, but one in which the rebuild has physically commenced, was one of positivity. To raise the first half a million pounds is an excellent achievement, and the team is already well on the way to raising the second half. The task that so many said was impossible, is being proved not to be. Work has commenced, and it continues on the airworthy rebuild of RB396. There is no let up in the workload and the team are working as harder than ever. The impossible is becoming possible and the team is making history. Now, more than ever, they need your support.