Working closely with Cranfield University, the Hawker Typhoon Preservation Group (HTPG) are delighted to announce the securing of a Napier Sabre IIa aero engine, serial number 2484, for use in the restoration of Hawker Typhoon MKIb RB396 to flight. There are only a small number of Napier Sabre engines remaining around the world that could be restored and it is believed that this example has only ever been used as a teaching aid making it the perfect power plant for rebuild and returning RB396 to flight.

Until the 1st January 2017 the engine has been based in Derby. Plans are now being drawn up to transport this engine, which weighs in excess of a ton, to its new home at Goodwood, formerly RAF Westhampnett, where it will form the basis of a fundraising campaign. At a suitable time, the engine will be subject to a strict assessment and rebuild in line with Napier and RAF overhaul manuals by an approved restoration facility in the UK.

The extreme rarity of this type of engine means that to be able to secure this resource, after 10 years of research and discussions, is a huge boost to the project. Not only is it likely be the only running Napier Sabre outside the US but it also makes RB396 the only Typhoon outside of the RAF to have ever secured a suitable engine.

The Napier Sabre is synonymous with the Hawker Typhoon and very early on the trustees concluded that no other engine could be used for RB396. Many years of research, negotiation and almost all available manpower has been utilised to reach this point, such is the significance of this example. The Napier Sabre is a horizontally opposed, 24 cylinder, sleeve valve engine. Incredibly powerful, yet compact, it was the pinnacle of piston engine performance during WWII. In service the engines were rated to approximately 2,200hp from 2,238 cubic inches (37 litres) powering the Typhoon to a maximum speed in level flight of over 400mph. Its type remains almost unique in the world today where internal combustion engines are dominated by poppet valve types.

A Supporters’ Club members only unveiling of the engine has been planned for mid February, which is being held at the engine’s new home. The event is fully booked, with spaces, understandably, being allocated within a few hours of the members being given advanced notice of the engine acquisition. After this event we will be running regular sessions where it will possible to come and view the engine, one of only two un-sectioned examples accessible in the country, spaces are likely to be limited and will be offered to members of the Supporters’ Club first. If you would like to join the club to receive this, and other benefits, check out our Supporters’ Club page. 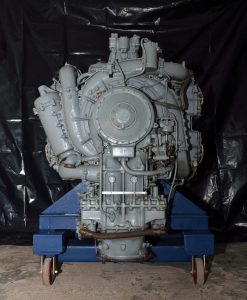 The HTPG are incredibly thankful to the assistance and support given by Cranfield University, to the previous custodians for taking such good care of the engine and to all of its supporters so far. It is emphasised that this restoration is being funded entirely through public support, donations and sponsorship.

Typhoon squadrons wreaked havoc before, during and after the D-Day landings and flew countless sorties in support of the Allied advance into occupied Europe in 1944-45, where the aircraft came into its own as a potent fighter-bomber. Typhoons tore low across the countryside attacking armoured vehicle and troop concentrations with four 20mm Hispano cannons, rockets and bombs and it was in this role that the Typhoon achieved legendary status. It was, however, a costly campaign, with more than 150 Typhoon pilots losing their lives in combat over Normandy alone, and a further 36 becoming prisoners of war.

Supreme Allied Commander Dwight D. Eisenhower sang the praises of RAF Typhoon squadrons during the aftermath of a failed German counterattack in summer 1944: “The chief credit in smashing the enemy’s spearhead, however, must go to the rocket-firing Typhoon aircraft…The result of the strafing was that the enemy attack was effectively brought to a halt, and a threat was turned into a great victory”.

The Hawker Typhoon Preservation Group is a registered charity in England and Wales, number 1167143, and has been established to oversee the rebuild of the only genuine combat veteran Hawker Typhoon MkIb in existence. Once airworthy the aircraft will fly in remembrance of the 666 Typhoon pilots killed during the course of WWII – a living memorial, finally, to a forgotten brotherhood. The return to flight is being planned to coincide with the D-Day 80th commemorations in 2024.