As we move forward into 2017 the team here would like to say a huge thank you to all our followers, particularly to those who have taken the step of joining our Supporters’ Club.

2016 was a momentous year for the project, we successfully made the leap into the ‘public eye’ with our Launch Event hosted at the Boultbee Flight Academy on 29 Oct 2016. This was only possible due to the years of hard work put in by the project founder, and in more recent years by the two other founding trustees.

The launch event, made even more special by the attendance of three WWII Typhoon veterans, was only possible due to the trustees’ hard work in establishing the project as a Charity in May 2016. Weeks of paperwork and email exchanges resulted in the application being accepted by the Charity Commission in one working day. This Charity status has allowed to team to surge forward with plans, not least, launching the project to the public.

We have now attracted coverage in several of the country’s, and indeed the world’s leading aviation publications and more of that is still to come in 2017. Our combined social media following is now over 14k, with the Facebook page passing 10k just a week before the public launch, such is the level of interest and excitement about the project.

The event at Boultbee, was also the launch of our Supporters’ Club. The Supporters’ Club is the best way you can actively engage with, and support this project as we move forward. As a member we will keep you up to date with the progress, ask your opinion on certain matters allowing you to be involved in decision making processes, you will receive advanced notice of events, we are also developing a schedule of Members’ only events, you receive a discount code for use on our merchandise, plus, and this is maybe the most important part – you can be sure that your subscription, be that for Life or on an Annual basis, is going towards the restoration of probably the most important WWII aircraft restoration happening right now. At the launch we held a raffle to be the founding member, #0001, won by Jason Gore and we hope we will see his support for years to come.

Earlier in the year we also carried out two successful recoveries in deepest, darkest Scotland. These recoveries were carried out with due regard to the law in the UK, involving landowner and MOD permissions, and all parts recovered from these two sites will yield valuable information that can be utilised in the rebuild, but also, it will ensure the stories of the two pilots who were flying the aircraft will have their stories told. You can read about their stories in the “In Remembrance” section of our website.

We have also published a new and updated website:

This involved many, many hours of hard work by all of the team ensuring that the look, content, layout and general feel of the website was correct. It was a lot of hard work, but a website is the most important portal for a project like this, and we feel it is exactly what we were after. You can read all about the project, recent news, find out the background of the team, read our FAQ, find out how to help, browse our gallery, take a look in our shop and also join the Supporters’ Club. It is all there, and we will be updating it regularly.

The team started of as one, then it became two, and then there were three to found the charity. As a result of the launch that team is now expanding and we welcome Richard Spreckley and Suzie Leadbetter aboard. You may have seen Richard’s modelling skills already, as he has offered to make 1:48 scale custom Typhoons initially, and soon he will be adding 1:24 scale custom Typhoons to that, with all proceeds going to the Charity. But Rich and Suzie are also going to begin taking over the role of Membership and Events secretary as that side of the project is growing at an incredible rate. In the coming months and years the project will grow still further and we welcome expressions of help from anyone interested. Notice of openings will of course be given to members of the Supporters’ Club first.

2016 finished with the “Hawker Typhoon Preservation Group”, the name under which the charity was formed, owning the largest collection of Typhoon parts outside of the RAF Museum, that is something quite special, and an achievement that we are all justifiably proud of. The Supporters’ Club is larger than we had ever imagined, with today, 1st January, being an equally strong day for sign ups. Santa also confirmed for us an early Christmas present, but, due to the size of it he couldn’t fit it down the chimney! As soon as business resumes in January we will have an announcement to make regarding this, and we will also be hosting a members’ only event to come and be the first people to see this wonderful piece of engineering! It will be free, but if you wish to attend you must be a member of the Supporters’ Club. 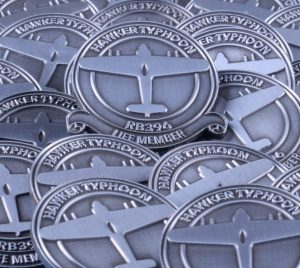 As we move forward into 2017 the project is set to grow and grow. You can look forward to seeing us at as many air shows as we can possibly get to, we are in the process of having our stand designed so that we are ready to go, and are in discussions with a number of individuals about sponsorship for that stand, and also for transport. We hope to have updates on these very soon.

We have been working for some time on a recovery on the continent that, if substantiated, could advance the project by a matter of years. Naturally we will update the Supporters as soon as we hear more, but work on that is ongoing and it is probable that we may have some news this year.

As soon as business resumes we will be in discussions with various locations about a home for RB and the Heritage Centre. Criteria for this are that the location must be an airfield and that the airfield should have Typhoon history. That narrows the field down considerably, but further criteria are that the location must be accessible to members of the public, and that we must be able to make the location ‘our own’. A corner of a hangar will not do, the Heritage Centre will be free standing, and an attraction in its own right. Work is ongoing and we hope to be able to make an announcement on this in 2017.

We will be adding more to our range of merchandise as we grow the project, in an effort to try and cater for everybody’s needs and wants, we will be adding products steadily throughout the course of the year to come, but if you have an idea for something, then please do get in touch.

We have made some huge advances in the CAD required to build something of this scale, with Jonathan working solidly on this, cutting down the eventual cost of the build by a huge amount. Such is his level of work that we aim to begin manufacture and restoration of the airframe this year. It is a huge step and one which we cannot rush into, everything must be considered and we must, of course, make sure that the finances are in place before anything is commenced. The project does not have one sole backer providing funds, but it is going to be funded by its supporters.

You may feel that £4-6 million is an unachievable figure but it is not. Take the higher estimate of £6 million. If that was divided equally between every follower on our social media channels, then that equates to just over £400. Still a lot? Well, then divide that out across the seven years that remain until our aim of D-Day 80th and then you arrive at a figure of just under £60. Divide that still further into months, and you arrive at a figure of £4.90 a month. That’s approximately the price of a beer or large glass of wine. How many people have made the resolution to give up or cut back on alcohol this year? That just puts it into perspective as to how affordable this project is, if EVERYBODY who has an interest in it gets behind it. Don’t forget that if you were to donate that money, then as a registered charity we can claim GiftAid on your donation, meaning we only have to raise about 75% of the total figure, the rest can be claimed back from the government. That makes it approximately just £3.70 a month!!

As we move forward we thank all those who have supported the project so far, and those who will support it in the future. Without the supporters this project wouldn’t be where it is today and we would not be on the verge of seeing a Hawker Typhoon take to the skies for the first time in over 70 years. This project is truly going to make history and you too, can be a part of it. Imagine the sense of pride you will feel, when on that 80th Anniversary of D-Day you can stand there and say “I have been a part of this since the beginning”. 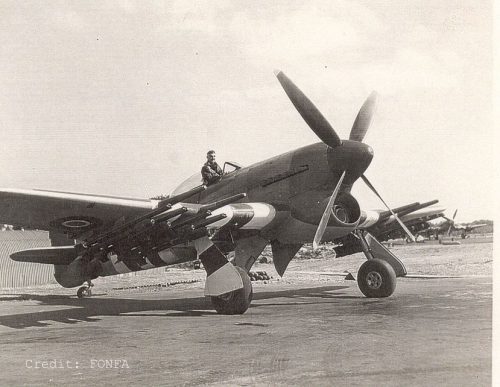