Sunday 19th February saw the official unveiling of the Napier Sabre engine acquired by the project that will go on to power RB396’s return to flight. On a smaller scale than our project launch event held in October 2016, but at the same location – Boultbee Flight Academy’s exquisite facility based at Goodwood Aerodrome, West Sussex. Places were limited at this Supporters’ Club Members only event and safe to say the fifty guests who managed to secure a place were all very happy to be there.

Before the main event began at 1300, the trustees and project team were lucky enough to host a very special guest, just a day ahead of his 93rd 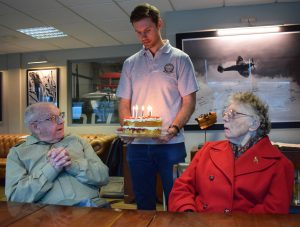 birthday. Following the project launch event in October 2016 and coverage in the local paper, the Chichester Observer, the project was contacted by the nephew of H.A. Gilbey, or Alex as he likes to be known. Alex flew the Typhoon during the latter stages of WWII and his nephew, Richard, wondered if it might be possible for him and his family to come and meet the team. This small event to unveil the engine was the perfect opportunity, and it was one day before his birthday. We met Alex and his family at 1130, he enthralled us with stories from the War, including when he flew his Typhoon back to Lasham for the last time, before the aircraft were scrapped and the squadron disbanded. We surprised Alex with a cake and some candles, which went down very well, as well as giving him a sneak preview of the engine and a good look round the hangar where he fondly remembered his time training on the Harvard, before moving onto the Hurricane and then the Typhoon. We look forward to keeping Alex involved with the project and hope to see him again soon. 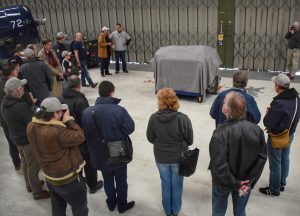 The main unveiling event began at 1300, with guests naturally arriving early, after tea, biscuits and some excellent project cupcakes made by Suzie, the guests squeezed into the reception room at Boultbee to be briefed about the engine, the story behind finding it, and finally how we managed to acquire this complete, and potentially never-run engine, something of a rarity. Following that we all moved into the hangar where the engine was waiting, under wraps. It was unveiled by Dave, the project founder, and then it was over to the guests, to look, take pictures, ask questions, and we even noticed a few cuddles being given to the engine – or were they trying to take it away?! Good luck, because at over a ton, the engine is an impressive bulk of engineering, comments still being made though at ‘how small’ it looked considering its power output. That is one of the interesting things about the Sabre, its power

output vs its size, quite a masterpiece of engineering. After an hour or so the guests started to disperse and make their journeys home, some had come a very long way, leaving enough time for the team to tidy up and take stock of the day. Another very successful event, just going to show the benefit to the members of being in the Supporters’ Club, and the level of support that is out there. We very much look forward to the next event, and we look forward to letting you know when that is, with, naturally, Supporters’ Club members finding out first. If you would like to join the club, you can find out the details here.

The engine will be subject to a complete strip down, assessment and rebuild; that is the only way to ensure that when it runs, it will be running safely. The team are currently in discussions with and making visits to all the potential engine rebuilders in the country, and when a decision has been made regarding who will rebuild the engine, then it will be announced. The major task ahead regarding the engine, is fundraising. It is estimated that the strip down and assessment will cost in the region of £50-80k. the Sabre is not a particularly complex engine, it is just different from a normal poppet valve type, however it is not a common engine, so the process will take longer, and be more labour intensive than a ‘normal’ engine, hence the cost. We do urge you to support the project, if you have not done so already the Supporters’ Club is the perfect way of doing that. Soon, we will be actively seeking sponsorship for various sections of the rebuild, the engine being one of those sections. More details will follow soon, but if you, or your company would like to discuss various options for sponsorship then please do get in touch via this form here.