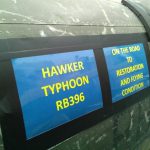 On the 10th May 2019, the restoration of Hawker Typhoon RB396 passed a major milestone with the delivery of RB396’s fuselage to Airframe Assemblies on the Isle of Wight.

Following the recent successful Crowdfunding effort, we are able to commence the rebuilding of RB396’s fuselage, but the first step involves getting RB to the Isle of Wight. An early start on the 10th May was preceded by loading both RB396 and Hawker Tempest PR536 safely for transport on the 9th May.

With thanks to all those who supported the Crowdfunder, the first part of the funding for RB396’s rebuild is in place and very soon the first rivets will be removed! We will keep everyone up to date with the progress of RB’s rebuild and the members of the Supporters’ Club will be the first to hear the latest developments. Not yet a member? Click the banner below the gallery to join now and play your part in returning RB396 to the skies where she belongs.