The team are pleased to announce that on the 28th July 2017, the lease was completed on what will become the project’s home for the next period in the journey. This is a five year lease of an industrial unit in Uckfield, East Sussex and is where every asset off the project will be stored and a visitor centre will be set up, so that in the near future the answer to the question “can I come and see it?” will finally be “YES!”

It is still early days in turning this unit into a real home, but the structure and layout of the building is excellent, with a front reception area, office, kitchenette, main warehouse and two WCs downstairs, and a larger room that will likely be a meeting room on the upper level. Over the coming weeks the entire collection will be transported to the location, along with all the merchandise and Supporters’ Club operation. The unit is over 2000 sq/ft and this size will now allow the project to hold more stock and expand the range – just in time for Christmas!! 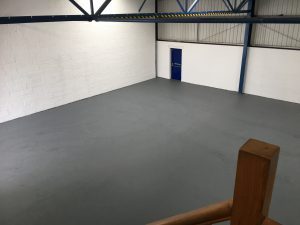 This new home will mean that for the first time, the entire project will live under one roof. This means that the next step can be taken with regard to actually beginning the rebuild of the aircraft. The team will be able to host the industry professionals shortlisted to carry out the task of the major rebuilding as previously it was not feasible to ask them to visit three different storage locations in order to inspect the hardware. It is hoped that very shortly after everything is set up, the team will be able to facilitate these meetings so that a concise plan detailing accurate costings and timescales for the individual sections can be produced. The overall cost/time figure for the rebuild is already known, and through previous meetings with these professionals the team know that to be accurate, but it is important from a sponsorship point of view to break that large figure down into individual sections. This new home will finally make that possible.

It is only down to the support shown by members of the Supporters’ Club, and the funds raised by subscriptions and donations, that the project is now in a position of financial stability to consider signing this lease. Let us not be too flippant with the figures, because it is still a large outlay, however this next step will allow things to grow at an even faster rate. So, the whole team would like to say “thank you” to all members of the Supporters’ Club, those who joined at our launch in October last year, right through to those who have just joined up, as it is you who have allowed the project to grow to this stage in such a short space of time and you should feel proud to be a part it all.

A very special thank you must also be made to Supporters’ Club member Janet Bendell, whose legal oversight of the transaction has been of huge assistance to the process. Janet is a Solicitor, and offered to undertake the work for free, in support of the project. What this means is she directly saved the group over £2,000 in legal fees that would otherwise have been incurred. At this early stage such a saving is greatly appreciated, and it equates to almost two months’ rent at the unit, so to Janet we say “thank you”. It is things like this that make the project, and the Supporters’ Club, what this is all about; people all coming together for the benefit of the end goal, and this has significantly moved the project forward.

The charity is now actively seeking expressions of interest for corporate sponsorship and donations to allow the project to take the next steps. The amount required to be raised in order to physically begin building the aircraft, is almost certainly less than you might imagine.

We are in the early stages of considering this, and it is more an idea than anything else at the moment, but, seeing as that is how all great things start, we are looking to have the unit “open for business” by the end of October. We still have a busy period ahead of us, with three more air shows, culminating in the end of season show at Duxford towards the end of September. Alongside these shows we will be working behind the scenes readying the unit, arranging and restocking the shop, organising the aircraft, and kitting out the unit so that it is a fit and proper home for the project and most importantly, safe and secure for people to come and visit.

So, provisionally we are looking at the last weekend in October, exactly one year on from our public launch event last year. We will of course have the entire collection on show, with a lot more than was present last year, and we will work hard to bring some more Typhoon veterans along for the day for the possibility of some signings/talks, plus much more, including cakes.

We will give you more details on this as soon as we can and of course, Supporters’ Club members will have priority.

Now the project has the keys the team are going to set about getting the unit up and running as a functional space that can be used for:

With these uses in mind we have a wishlist of items that we will ultimately purchase, but, if anyone reading this happens to have any of these items and would like to donate them, or know where we could get them for a good rate, then please get in touch. Some items on this list are more long term, however others will be required almost straight away.

Most of the team is fairly handy with DIY and will be looking to fabricate a lot of things, such as moveable stud walls for sectioning off different areas of the unit. With this in mind any donations/sponsorship of timber and sheets of ply, screws, paint etc, or time/tools to help with the fabrication would also be greatly appreciated.

Clearly this is a very long list, and it will grow even more as time goes on and new requirements crop up. Ideally the project would be looking for donations of any of the above equipment, to allow the team to get going and hit the ground running. So, if you have, or know of anything on this list, or anything else you think would be beneficial to the cause, then please do get in touch to sam@hawkertyphoon.com or use the contact form on our website.

It has always been the intention that rebuilding this aircraft will be a big team effort, so please don’t underestimate the importance of donating, for example, a first aid kit or a set of tables and chairs as it means we are able to funnel funds into the aircraft, rather than furnishings!