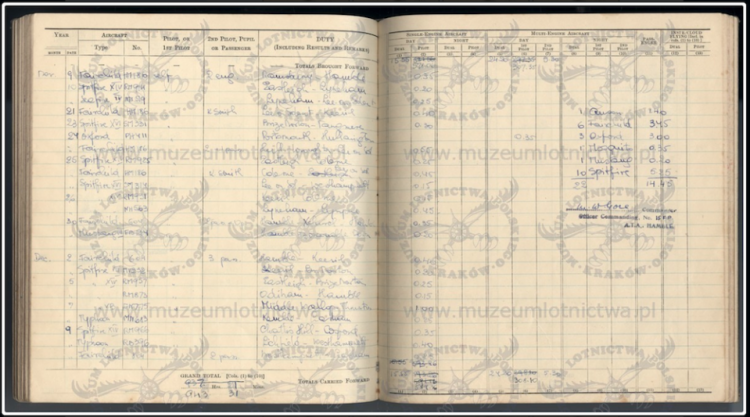 After contact through our website, we are pleased to be able to add one more piece into the jigsaw of RB396’s life. With thanks to Darren Pitcher for spotting the image on a Polish website, charting the wartime flying career of ATA pilot Anna Leska-Daab, we can confirm that RB396 was delivered from RAF Lichfield to RAF Westhampnett on 09 Dec 44. The image, found in amongst a sea of logbook photos and scans on www.muzeumlotnictwa.pl shows in some detail the amount of ferry flying, and the variety of aircraft being flown, by Anna and clearly depicts her arrival at RAF Westhampnett.

RAF Westhampnett is now known as Goodwood Aerodrome and is the base of charity trustee Sam, whose own Grandfather was based there in May 1944 flying the Typhoon, before succumbing to enemy fire over Holland and becoming a POW. Goodwood Aerodrome is being investigated as a possible base for RB396 and to find out that the aircraft physically flew from here during the hostilities is something very special. It could be a case of “RB396 coming home…”

Sam said of the discovery “to have recovered parts of my Grandfather’s aircraft that could potentially form part of the rebuild which I could then fly from Goodwood is something very special. But if those parts were incorporated into the aircraft that actually flew from this airfield all those years ago then she flew from here again, that would be something incredibly special. We would be closing a loop in history, bringing the aircraft full circle.”

Work with the restoration is ongoing, with an incredibly busy year planed for 2017. The team is working hard to meet the D-Day 80th anniversary in 2024 and needs all the support possible. Joining the Supporters’ Club is the best way to stay up to date with and follow the progress.