On this day 72 years ago F/L C.W (Chris) House took XP-W, RB396, for her final flight. After being hit by flak he made a successful wheels up landing in the Netherlands and spent the next 4 days evading and made his way back to allied lines.

RB was in store with 51MU, RAF Lichfield, when readied for squadron service. On the 9th December 1944 ATA pilot Anna Leska-Daab delivered RB396 from Lichfield to Westhampnett (Goodwood), a 40 minute flight. We were lucky enough to be sent a link to her log book showing RB’s first official flight for the RAF. 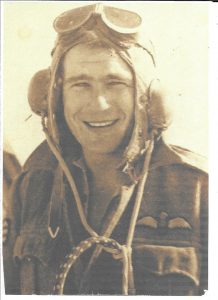 174 Squadrons records changed in late 1944 such that the individual codes for aircraft used on operations were no longer recorded, would RB’s history be lost forever? It was known that Chris House continued service in the RAF for many years after the war and that he retired somewhere in the South West of England….but nothing else. After a number of years attempting to trace Chris and his family we scaled down our search with the thought that we would not be able to locate anyone, we could only assume that ‘W’ was considered to be Chris’ aircraft and that we may never be able to find out if she had been used on 1 or many operations.

Out of the blue we received a message from Chris’ son and daughter, they had traced their fathers aircraft to the project and were really interested in finding out all they could. They still have their fathers original log books and they are attempting to trace any other flights in ‘W’. Unfortunately Chris was no longer with us but they were able to put a face to the name when we were sent a number of photographs of Chris in RAF service (we have not yet received permission to post one of them but will if we are able). What a moment….

To our complete surprise at the beginning of February we were sent a link to a newspaper article in Canada that was published in 2012. It was the story of a Typhoon veteran, P/O Frank Johnson. He flew with 174 squadron and was shot down on the 30th March 1945, just 2 days before RB. A photograph of Frank at the time of the article showed him holding a Typhoon model marked up as ‘XP-W’, RB396. This was very unusual as no-one would pick this precise combination of markings without some knowledge and of course this was highlighted with the photograph caption indicating he was holding ‘his Typhoon’. 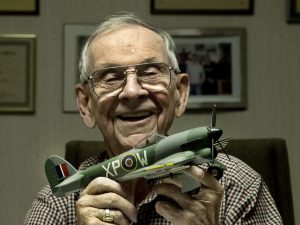 Frank Johnson holding the model of RB396, the aircraft that was considered “his” during WWII. Credit: National Post.

We managed to trace Frank’s nephew and it was fantastic to find out that he is still with us and although he had only started to talk about his experiences in the last few years he was excited to hear ‘his’ aircraft was being restored. We have had a few conversations and e-mails with Frank and ‘W’ was indeed his aircraft and he used her on many operations, included getting ‘shot up’ a few times but he was lucky in that it was in the fuselage and not the engine.

Frank is an amazing man and his recollection of some details is phenomenal, particularly being able to quote the exact landing speeds required to get a Typhoon down in one piece over 70 years since he last did it. It is early days so we haven’t compiled all the details but Frank still has all his log books and we are hoping that we may be able to piece together RB’s history when combined with Chris’ records.

Chris’ and Frank’s family are actively following the project, RB exists as our way of thanking all the Typhoon crews and to raise awareness about the contribution and sacrifices that were made by everyone involved with Typhoons. Without all of these men and women many thousands more lives would have been lost and perhaps there may even have been a different outcome.

Thank you from all the team to all the Typhoon crews, everyone involved designing, building and maintaining the aircraft and thank you to Chris House, Frank Johnson and their families for allowing us to learn more about RB…a genuine 2TAF combat veteran which will grace our skies once more in salute to everyone involved. Read the article that showed Frank Johnson was the main pilot of RB396 here:

To help us honour everyone involved then join us by becoming a member or choose something from the shop, every little helps and your contribution will help RB fly once again.