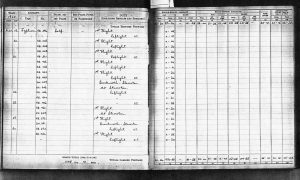 With thanks to Mark Collier, Mark Crame (609 Squadron Association Member) and Chris Thomas (copies of ‘Pinkies’ log book) for the research they have conducted into the history of RB396.

We are pleased to be able to reveal that the records of RB’s test flights have been uncovered. None other than Acting F/L (later S/L) Laurence ‘Pinkie’ Stark was on rest at Gloucester Aircraft and was the pilot responsible for completing RB396’s test flights prior to acceptance by the RAF. The location of his original log books is currently unknown since the passing of his brother, Mark Collier and Crame were attempting to find these when Chris Thomas forwarded a copy of the relevant page.  He had met Pinkie in the 1980’s whilst researching the Typhoon and had been able to take copies of his log books at the time.

It seems that RB’s first 45 minutes flight wasn’t without its faults as a further 15 minute flight was required after adjustments were made. See RB396’s History