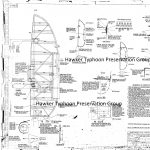 At the recent members’ day on Sunday the 22nd April, in front of special guests George Wood and John Brockhurst, WWII Typhoon pilot and ground crew respectively, the trustees of the Hawker Typhoon Preservation Group (HTPG) were pleased to announce to members of the Supporters’ Club that, since the founding of the charity in May 2016, fundraising targets have been sufficiently met in order to allow work to commence on the first section of RB396.

The first section to be rebuilt, is a section purchased as a result of a fundraising appeal to members of the Supporters’ Club made in November 2017. Work on the rudder, which requires only minor modification work to be converted to Typhoon spec, will be commenced at the end of May 2018 and will be undertaken by Airframe Assemblies on the Isle of Wight, with an expected duration of three months.

Airframe Assemblies have also been selected by the HTPG to undertake the construction of RB396’s wings in approximately 2-3 years time, both parties are currently working on acquiring the relevant data, in terms of missing drawings and/or original sections in order to allow this work to commence on schedule.

Dave Robinson, Trustee and project founder, said: “I am incredibly pleased, that this journey I set out on in 1999 is finally beginning to bear fruit. Little did I know, that what started as a hobby, would develop into a registered charity working towards the airworthy rebuild of what is likely to be the only flying Typhoon in existence. The progress of the project since 2014 is phenomenal, and since the founding of the charity in 2016 the growth has been exponential. The support coming in from across the world is breathtaking and with this first step in the physical rebuild process, we are one step closer to seeing RB396 take to the air in 2024, a target that is still achievable.” 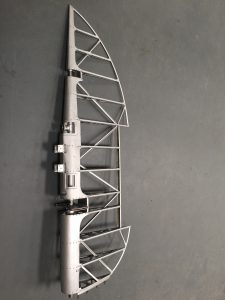 The trustees would like to thank all those who have contributed to the project so far, especially members of the Supporters’ Club which is nearing its one thousandth member in just over 18 months. Sam Worthington-Leese, the other trustee remarked: “this milestone in the project is what we have all been working towards these many years, only in the last two years has the public profile of the project increased with features in magazines such as Flypast and Aeroplane, also with the growing online presence, around 25,000 followers, but there have been many years of work before that. The hard work is just beginning, we have reached a fundraising target to allow us to commence the work but we must carry on in order to allow the work to continue. We must raise at least £75,000 over the next six months and £1.4Million over the next three years if we are to stay on track. We wish to speak with anyone who would like to assist with the raising of these funds, and urge anyone considering making a donation, or joining the Supporters’ Club, to please do so. We will continue doing everything we can, to make a flying Typhoon a reality by 2024”

The group is attending many major air shows this season, developing on last year’s success, and adding to that are a number of Open Days at the Uckfield base, something that wasn’t possible last year. The days are a great opportunity to see all the parts that make up the project, and to meet the team behind it, if you can’t catch them at an air show near you. Added to that are a number of new fundraising items, such as the limited edition wristwatches, and prints along with a raffle being drawn at the end of the season, with more new merchandise being developed throughout the year.

To join the Supporters’ Club and be a part of the story, click here.