On Wednesday 15th November, Boomer and his team from “Wings of Memory” made the journey from their base in Belgium, to the project HQ in East Sussex in a long overdue and eagerly anticipated visit. Boomer is a Lifetime member of the Supporters’ Club with an avid interest in aviation, particularly WWII and recoveries. He is a current serving member of the Belgian Air Force and in his spare time is very active in the recovery scene in Belgium and surrounding countries. Their team had an early start, to arrive at our base for around 10.00 local time, and on arrival it was clear to see they came bearing gifts!

The purpose of the visit was to deliver a large amount of engine parts, but also to cement what will go on to be a long friendship between the project and Wings of Memory, it is clear that both teams will be able to help each other out to quite some degree. The engine parts being delivered came in three large crates, each requiring two men to lift, a lot of metal. The parts originate from the “spare” Napier Sabre engine currently in the project’s possession and donated by BAHAAT, a recovery team also based on the continent. There are many items in the crates, in very good condition – sleeves and cylinder heads being instantly recognisable, but also worm gear, impeller blades, gears and much much more. The parts are all in excellent condition and will be of great help to the project when it comes to the point of rebuilding our main Napier Sabre. 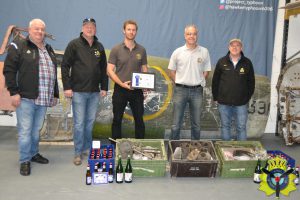 But it was clear that Boomer and his team hadn’t finished there. They have a lot to do with the B67 Ursel air base, and presented Dave and Sam, the project’s trustees, with an artwork depicting two Typhoons low flying over the air base as it currently looks, complete with memorial, it is a wonderful piece and will be taking pride of place in the entrance lobby. They had also worked on a special, framed, certificate denoting the friendship of the project and Wings of Memory whose drive is to “Remember Them”, the phrase Wings of Memory has coined as their own. B67 Ursel also create a beer of their own, adorned with rocket firing Typhoons on the label and the project has now found itself the proud owner of two crates of these bottles – for which there are special plans.

After the documenting of the parts being gifted discussions turned to how the two projects could work together in the next few years to raise support for the project. A number of good ideas have taken hold and we look forward to bringing you more information about this, one in particular involves being able to fly in a genuine D-Day veteran aircraft…  After signing Boomer’s book, completing the paperwork and exchanging a few other gifts,

Dave and Sam bid the team goodbye, but not before a shot (apparently this is a tradition?!) – incredibly they had driven all the way from Belgium just to visit the project and drop off the parts! After a stop at the Battle of Britain memorial in Capel-le-Ferne it was back on the channel tunnel for the Wings of Memory team. Dave and Sam are incredibly grateful to Boomer and his team, for taking the time to donate these parts to the project, which will go on to be incredibly useful. As two teams on different sides of the channel both look forward to working with each other more in the future.

You can check out their work here: www.wingsofmemory.be