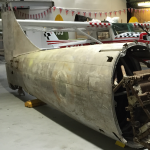 On 17th November 2017, the funds cleared for what was the project’s most expensive purchase to date. In time for the first Open Day at the new base, the team had acquired what is thought to be the only genuine four blade Typhoon/Tempest spinner in existence, and shortly afterwards from the same source, a complete rear empennage, tail unit and rudder was made available to the project. The cost of these parts far exceeded the available bank balance, and so, at risk of loosing the parts the Trustees took the decision to ask the Supporters’ Club for help. 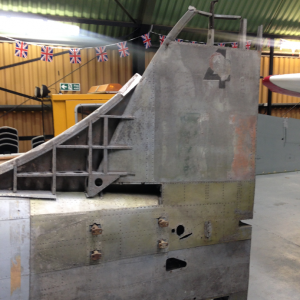 On Tuesday 7th November the Trustees launched their appeal to the members of the Supporters’ Club, which now numbers around 650 and growing. Hoping initially to raise a deposit of £10,000 + VAT in order to secure the parts, the appeal has now raised over £75,000 in one week, with this amount still increasing. Such was the generosity shown by members of the Club, with one member providing over £50,000 and many others donating two, three and four figure sums, that the parts were purchased outright, with a large surplus, and are due to be collected later this month. A number of other items were also purchased, including a complete anti shimmy tail wheel set up, and the tail wheel doors.

These large sections, actually from a Tempest II, will significantly advance the project and will bring about a huge saving in both time and more importantly money, when it comes to the rebuild – which could now physically start as early as Q1 or 2 of 2018, subject to funding. The rear empennage is actually a Typhoon part number, showing that it was removed from the Typhoon production line, in order to become part of a Tempest II, whilst the tail unit only requires minor modifications for it to also “become” Typhoon. The rudder, which has already been rebuilt to airworthy standards, also only requires minor modification to be made suitable for RB396, so it is quite likely that the rudder will be the first airworthy component to be completed for the project.

The next target with regard to specific fundraising, is to raise sufficient funds in order to commence the physical build. A number of other factors must be completed first, but significant strides are being made in the right direction for this to soon become a reality. 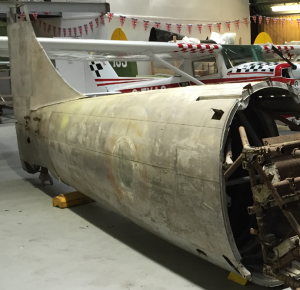 The Trustees would like to take this opportunity to thank the generosity of the members of the Supporters’ Club who were able to contribute to this appeal and look forward to when these members can look at the airworthy aircraft and feel the sense of pride that will come with knowing their direct contribution to these sections. If you would like the opportunity to be involved with appeals such as this, as there will be many more, then please consider joining the Club. Even if you are unable to make what might be considered a large donation, you will still be, as a member of the Club, the first to know of any major developments and exciting news and opportunities such as this. 2017 is the founding year of the Supporters’ Club and founding members with a current membership will receive priority invites to the unveiling, first engine runs and first flights, so it really does pay to be a part of it from the beginning. Founding membership is available up until 31st December 2017.

Provided logistics fall into place, it is hoped to exhibit the new sections at the next Open Day which is due to take place on Sunday 3rd December at the project’s East Sussex home. A sign up form for this event, for those wishing to receive the information about it, has been put at the bottom of the home page of our website. If you want to be among the first to see these parts, then enter your details and come along!

Find out about the Supporters’ Club, and join, here.

Visit our home page, to sign up for information on the next Open Day, here.

If you wish to donate towards the project, you can do so, here.